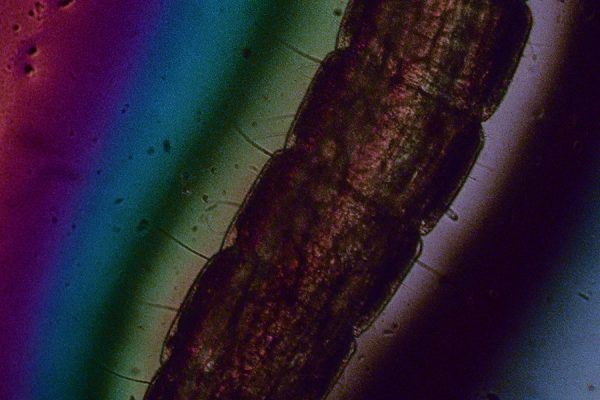 A Creak In Time is a 27-minute meditation on the ever-expanding fractal universe with recurring themes of transformation and altered perception, switching scale from microscopic topography to the vast distances of the cosmos. Presented in two parts, the first exploring the macro; the nature of physicality and formation on a celestial level, with the latter concerning the micro; the world unseen, thriving with lifeforms, continuously expanding and in complete symbiosis. The soundtrack by Howlround has been composed entirely of creaking objects and manipulated on magnetic tape machines.

Is an Australian born artist based in London. His practice ranges from audiovisual and musical performance, installation, experimental film & video works and curatorial projects. Working predominately with 16mm, McInerney creates recherché, non-narrative works using in-camera and camera-less filmmaking techniques. McInerney releases as Merkaba Macabre and is the founder of Psyché Tropes, an audiovisual label, releasing and exhibiting work by artists practising within a cross-disciplinary fields.

Founded by sound artist Robin The Fog in 2012, Howlround is a quintet (four machines, one operator) that creates recordings and performances entirely from manipulating natural acoustic sounds on vintage reel-to-reel tape machines, with additional reverb or electronic effects strictly forbidden – a process that has seen their work compared to William Basinski, Philip Jeck, Morton Feldman and even the sculptures of Rachel Whiteread’. In an age where one can create all manner of electronic music with a simple swipe of a mouse, Howlround proves not only how much fun is to be had in making things complicated again, but conversely just how little effort is sometimes needed to create a genuinely uncanny and beguiling sound-world: the rough underbelly of our pristine, Pro-Tools universe. The soundtrack to A Creak In Time is out now on Psyche Tropes, while a split LP with Marta De Pascalis will be available imminently on the Wormhole label.